Almost a month ago, at 11 months old (well, a day off of 11 months), Sebastian went on his first bike ride.

We bought a second-hand Croozer Kid2 as recommended by a fellow cycling parent. Sebastian sat in one seat, and “Cow Cow”, his large Jellycat Cow, sat in the other, both tucked up under a quilt.

Ollie attached the Croozer to his Giant TCR, and off we went on a short trial ride, to coincide with nap time.

Sebastian was so amazed and excited that he fought sleep for half an hour or so, but finally gave in and had a nap for the last few miles of the 10 mile ride.

10 miles, which took us an hour! It was hilly, and a lack of maintenance and cleaning had taken toll on our bikes and Ollie was subjected to a problem that I had experienced earlier in the week; he was unable to change down off of the big ring. Making what was already a challenge, towing a trailer with a small person and cow, even more difficult. He did very well, and I struggled to keep up with them!

Sadly a nasty bug kept us from repeating the experience the following weekend, and then other commitments kept us away from our bikes last weekend. But this weekend we were free and (semi) healthy, so we decided to have another trial ride, this time with me towing.

After some domestic delays (yawn!), we departed for our ride somewhat late, so I made a last minute suggestion that we ride to a local farm cafe for lunch. We stuck a packed lunch in the ‘boot’ (trunk) of the trailer for the little one and headed off on what was supposed to be a 10 mile ride.

The cafe, 5 miles in, was perfectly placed as I was desperate to use the facilities (waaay too cold for the SheWee), but closed on a Sunday. So, sure that we would find a pub if we continued, we carried on, going away from home.

We came across one pub that was closed, then went on and on, until we got to a town. We cycled right through the town, and were about to give up when we saw a tourist sign to a local pub, which we then followed. Frustrating that was the only sign and we didn’t come across a pub. We pulled in, and I had a cake to console myself, whilst hoping that I would soon find some facilities!!!

Ollie checked Google Maps, and some 8 minute ride away was a farm cafe and it was open. So, off we went for a lovely lunch, and a play on their play park. When we got there, we’d done over 13 miles!

Ollie offered to tow home, and it’s lucky he did – a strong headwind meant that it was very difficult cycling to get back and I was exhausted. At one point, going up a hill my Garmin AutoPaused because I was going so slow! If I’d had to tow, we’d either still be going now, or we wouldn’t have made it!

Two naps, two play parks and a large lunch meant that Sebastian enjoyed his second outing despite it being more than double the length it was meant to be (24 miles altogether), and a 4 hour + trip. 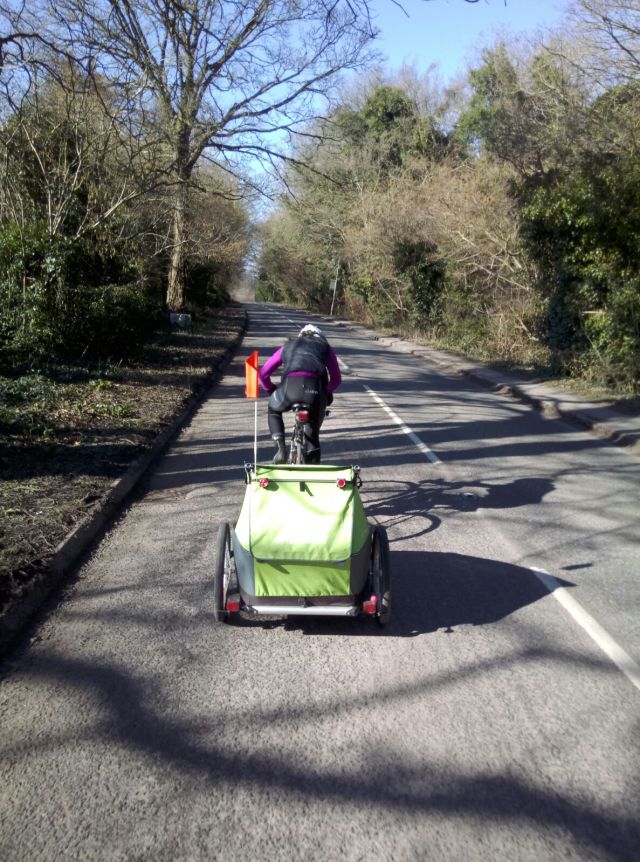