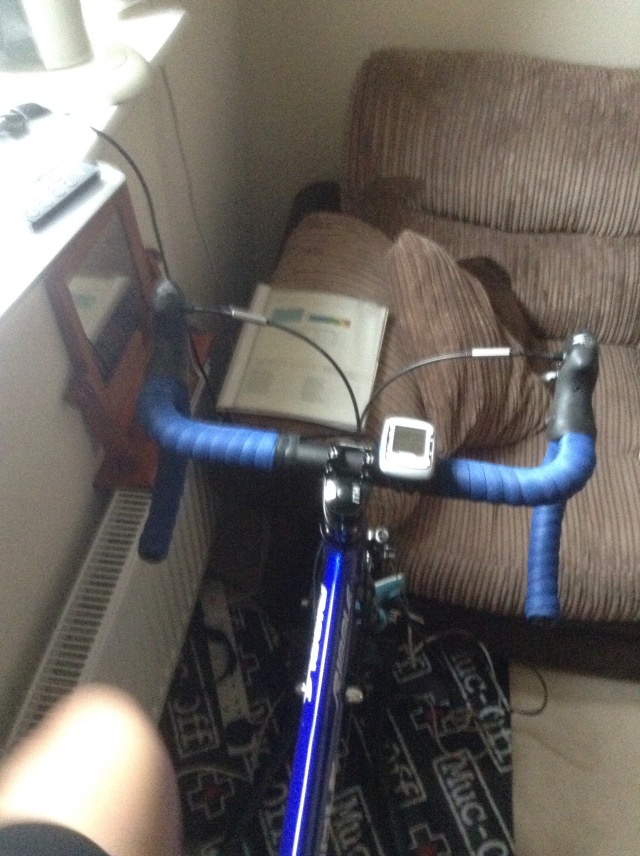 ‘My’ team – Swindon Town Football Club’ (STFC), are going through a rough patch: bottom of the table, no manager and a lot of losses to their name.

So, while watching a rather boring game this evening (and another loss), my brother and I were chatting. I was telling him about a chap that Ollie and I came across in Central Park whilst we were riding our city bikes… A road cyclist who whilst cycling past us had said “When you want to get into road biking check out my bike shop – Echelon Cycles”.

I explained to Chris that after the guy had cycled by, Ollie and I had decided to race him; we got up to top speed on our basket-ed, heavy city bikes and whizzed by him – giggling and teasing him a little. Then we had a little chat.

And that was the extent of our encounter.

Chris responded, that he had met a NYC bike shop owner once, in Lake Garda. Of course, there is no chance it could be the same guy. Could it?

It turns out though, that it absolutely could, and was, the same chap that my brother and his friend met and cycled with for three days in Lake Garda in 2012.

How strange is that? 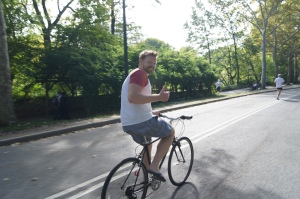 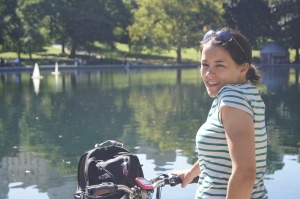 Me in Central Park

I think I would generally consider America to be the home of the motor car. Why? Well, the wide roads, the drive-thru’s (banks, food, pharmacies etc…), Henry Ford, and the general necessity to own a car in a country so broad. Surely riding a bike on these large roads, with huge trucks steaming past just doesn’t happen.

On the other hand I consider England to be one of the big cycling nations. Why? I grew up knowing about cycling; my Grandad is a cyclist, my uncle was and as he grew up my brother became the next generation cyclist. The UK has some cycling greats: Wiggins, Froome and Cav; Before them: Hoy, Boardman, Simpson and Holland. And the girls… Pendleton, Trott and Armitstead. We have the Tour of Britain and compete strongly in the Tour De France. The Olympics of 2012 brought a renewed passion for the sport, and the launch of the Ride London sportive.

But these were just my perceptions, based on exposure.
In reality, Canada and the USA have an extensive network of cycle lanes, multi-activity lanes and cycle-specific routes. Toronto has a cycle map which enables you to plan a safe cycle route through the city and some of these lanes even have their own traffic lights. But they have implemented more than just an infrastructure, the drivers have complete respect for cyclists; they yield to cyclists at junctions, or when a cycle path crosses a road.

Conversely, with exception to London, the cycle network in the UK is either non-existent or unreliable. Road cyclists avoid cycle tracks due to the likelihood of them turning to gravel or becoming unrideable. Cycle lanes are shared with BUSES! And outside of the main towns and cities, nothing exists. We probably have slightly quieter roads, but they are smaller and have faster speed limits. Finally there is a complete lack of understanding, and thus respect, between cyclists and drivers – probably due to them having been thrown together in uncomfortably shared circumstances. Something which has caused a vicious circle or self-fulfilling prophecy to develop in which drivers and cyclists expect each other to exhibit certain behaviours and thus act defensively or aggressively in anticipation.

To sum up, our two holidays this year have both left me wishing we had the cycling infrastructure of our foreign cousins – extensive, pleasant, well-kept and accessible.

I wonder how NYC deals with cycle traffic…

Before escaping to the (rainy) U.S, we put the summer bikes into hibernation and Ollie created them a lovely place to hang out for the winter months. 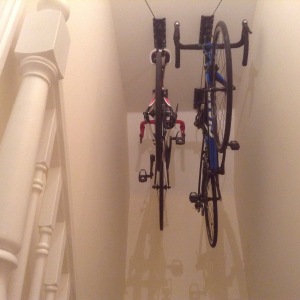