It seems to have been windy for months, and rainy for weeks; apparently summer in the UK happened whilst we were visiting mainland Europe. I expect there will be a second summer at some point in September (maybe whilst we are in Canada) but at the moment I am pretty happy with the persistent down-pours.

Well it seems I have over trained (Under Performance Syndrome) and I can barely motivate myself to get on my bike, and when I do it hurts, everything hurts.

According to the Internet, and my GP, the only way to recover is to rest, do absolutely no exercise, for weeks or maybe months. It’s frustrating, but if it were sunny, it would be a lot worse! I’m really not very good at resting and when the sun comes out ignoring my bike will be very difficult.

PARENTAL AND GRANDPARENTAL GUIDANCE: READING OF THIS POST IS DISCOURAGED.

…okay so, the first half of the day wasn’t completely rosy. I missed out the nasty parts and saved it for this half of the story! So a quick backtrack…

Although I was steaming along and having a great time, people were dropping everywhere. There were crashes galore! One chap a little further ahead of me slid off his bike in slow motion and took two down with him. There was the constant call of “ambulance, keep left” and then there was a body on the side of the road, which really shook me up.

As we were cycling along through a fairly urban part of the course, before Richmond park we could see an ambulance up ahead, stopped and attending to an incident. As we got closer we could see them on the floor dealing with a patient, at which point a wave of worry hit me. I knew it wouldn’t be Chris, he should be nearly finished. But Ollie? And then we were going past and I could see it was a female. Relief. Followed by guilt. Followed by an hour or so of distress at passing so closely by such a nasty accident (it didn’t look good).  I would have thought that the officials could have held up a sheet to protect her from the thousands of passing eyes.

So, when I started the descent from Newlands Corner I was still shaken and taking it fairly carefully, but beginning to enjoy myself again, and then another ambulance squeezed past and all of a sudden everyone stopped. We had stopped as a bunch before, but this one seemed like it might be more enduring.  And it was..90 minutes or so later we were finally released from our slow, start-stop clompy cleat walk up Leith Hill and allowed to get back on our bikes (on the steepest part of the course).

However it had become clear through text messages that Ollie was actually behind me, and somewhere within a mile of me, so I stood to the edge and waiting for him to catch up. Unsurprisingly he was very fed up, his day hadn’t gone at all to plan; his wave had been delayed for an hour so he had actually started after me, and his brand new Continental tyre had a fault so he had, had to buy another. His early average speed of 22 mph had been ruined.

We cycled the rest of the route together. We saw many more ambulances and many more incompetent cyclists. The call of “ambulance” really does make some people panic. If you can hear a call but not the actual ambulance then you have some time to respond..however I saw one woman panic so much she fell off sideways from a pretty much stand still and another guy stopped dead in front of me whilst going down a hill (we were the only two people in sight).

We made the most of our last few miles, giving highfives to supporters, enjoying racing past people on Box HIll and finally by sprinting down the Mall and across the finish line. Official time: 8 hours 24 minutes 31 seconds.
I reckon it would have been 6.5 – 7 hours.
Ultimately, someone died on the course, all three of us returned unharmed and Chris had a great birthday present. I won’t do it again, but Ollie should give it a go on an early start with the the peloton, rather than later on. 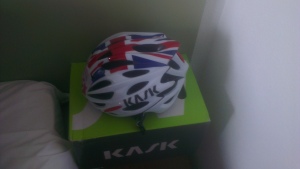 After writing my last post, I left the hotel and found the start with absolutely no problems along the way. The weather was much warmer than I expected it would be at 0700 hours and I ended up taking my arm warmers off to stand in the waiting area. Within a few minutes I got chatting to two ladies, one of which was called Lauren – and I ended up cycling a bit of the first part of the course with her and then again a little later.

We set off on time, or possibly one minute early – and we flew past all of my 2014 puncture locations. The weather was perfect and the participants were friendly and fun.

After leaving Lauren behind I started to draft a few people, and then found someone going the right speed for me so I sat behind him for a while before feeling bad and introducing myself! His name was Rhys and he lives about 20 miles from us; his friends had left him behind. We cycled together through London, Richmond Park and through to the bottom of Newlands Corner, where I accidently dropped him. Feeling bad I did wait for him at the hub but didn’t see him come through, until I was too far away to get his attention.

Newlands Corner was the 47 mile point and it had taken me around three hours to get there – my Garmin stated that I had averaged 16.3 mph up to that point and I was super pleased with myself – I was feeling good and beginning to hope for a sub 7/6.5 hour time.

And that is where the second half of the day started…

There’s now just ten minutes until my leaving time and the weather forecast is amazing!

My start time is a little earlier than last year 0803 instead of 0810, but there’s an hour of hanging about before that.

I won’t be able to take pictures, or post on the way round, as my mobile phone isn’t reliable enough to keep charge for phone calls, let alone anything else.

So, off I go. 8 hours of traffic free cycling…