The bike contenders, before and after the London Bike Show:

Giant Avail Advanced 1: Stuck in a port in LA apparently – but there certainly aren’t many in the UK until June (too late)! Plus it’s a Ultegra/105 mix.

Canyon Endurace 9.0 CF: It turns out it isn’t possible to get 11/32 on this bike. A Laura requirement for hills.

A Rose carbon ultegra bike: Nothing wrong with this bike, four week delivery, and it was a serious contender for most of the day, but it is from Germany and I think I would prefer the convenience and safety of a UK supplier.

Cannondale Synapse Carbon Ultegra: Would test ride one if I could find one, but I’m not that bothered – probably not a serious contender. The women’s versions were disgusting (glitter?!?)

Scott Contessa Solace 25: I am test riding one of these in the week.Only 105 though.

Ribble Gran Fondo: An addition to the list this morning, thanks to Ollie. Looks amazing!

Oh, well that was some good ruling out :-\

To finish off, here’s a couple of pictures of Ollie and I trying the recumbent challenge. Ollie was the winner of the day!

And one of Ollie, not trying very hard… 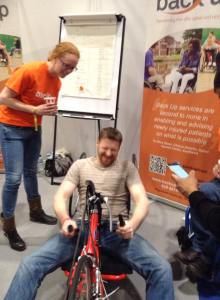 2 thoughts on “The contenders”