I have to admit, I wasn’t really looking forward to my Triathlon experience, but it was great! I really enjoyed it.

I imagined that I would turn up at 0730, hang around until 1000, struggle through a slow 26 miles and then wait hours for the runner to finish. I was wrong. There was very little hanging around, well for me anyway! Ollie kindly supported me, and was described by Fiona as a very good bag carrier; in fact he was like a pro team support car – handing up bananas, a towel and water as required, whilst also undertaking photographer duties. Fiona, Zoe and him had much more time hanging around, due to the cycling length taking much longer to complete than either of the other disciplines.

Zoe, I met for the first time and Fiona I used to work with. With ten minutes to go, Zoe wet-suited up and got into the water for the mandatory acclimatisation period, until the klaxon sounded and a sea of orange caps set off around the 1500m course. Once they’d reached half way (it was impossible to tell who was who) I went and waited in the transition area. Zoe did a fantastic time; less than 30 minutes! Absolutely crazy though – there’s noway you’d get me in that weed filled lake! She passed me the timing chip, which I strapped to my leg and then ran through the aisle of bikes to where mine was racked, collected it and continued running to the cyclist start line.

The first few miles were a little awkward, a man had crossed the start line at around about the same time as me and we were going around the same speed. I didn’t want to pass him as I knew that he was likely to be faster than me once he got going however I also didn’t want him to think that I was drafting him and therefore cheating. Eventually, knowing I had the energy I went past him, though don’t remember whether I stayed ahead or not… they all looked similar!

I think adrenaline got me round the first half of the course, whilst banana and Jelly Babies sorted me out for the second lap. The wind picked up slightly during the second lap, and we cycled into a head wind along the final straight. As we approached the line I overtook someone…wooohoooo. With legs like jelly I leapt off the bike and ran my bike back to the rack, then cheered on by Zoe sprinted the length of the racking to a waiting Fiona, who took the timing chip from my leg as I collapsed on the floor. I had done my 26 miles in 1:27.31, which was better than the 90-100 minutes which I had predicted, though I have to admit, I had done my trial run of the course the wrong way around!!!

I quickly recovered to watch Fiona do an amazingly fast run. All in all it was great fun and, although as the only all girls team we didn’t have much chance of a prize, we produced a good overall time between us; 02:39:14:85 which put us 112th out of 235 finishers.

I think we will be teaming up again next Season for a few events! 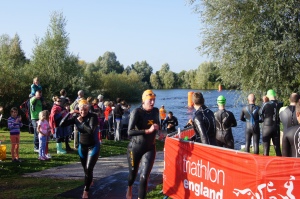 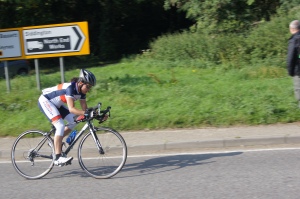