I’ve been really nervous this week about my upcoming sportive (Sunday), but today has been an exciting day so it helped me to forget.

After only one ride on his new bike Ollie decided to do a Time Trial! I was planning to marshal but at the last minute, due to the nice weather, I decided to race too. We arrived early and got places 3 and 4. While hanging around at HQ I purchased my new Dame Cycling  jersey but I was totally distracted, having received an e-mail saying that my essay results were available online (remember NoSQL – the course which I was going to leave because I was clueless…). Well, I needed to load the webpage in order to see my results but  HQ is in the middle of the countryside, and often I struggle to get mobile signal, let alone 3-G so Ollie and I were stood on my car, waving both our phones in the air trying to load the page. Five pages later and after much torturous waiting I found out that I had been awarded 75% and 78%. I am totally shocked. I genuinely thought that I would struggle to get 50% to pass.

I improved on my last TT time, but still not sub 31 and not my best time. Ollie however, managed a 28.51 on his first time out. Impressive and a little sickening!

For all my effort I looked like this, at the end: 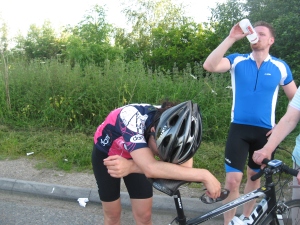 Finally, this evening, I collected my latest cycling related purchase…

Do you know what it is? (I had to ask my Mum whether it was acceptable to post about this!) I’ve not tried it yet… updates to come!

P.S…In case you were wondering… I didn’t catch him up. In fact, after about five minutes of trying to catch him up I don’t remember seeing him again. I base this on years of experience.